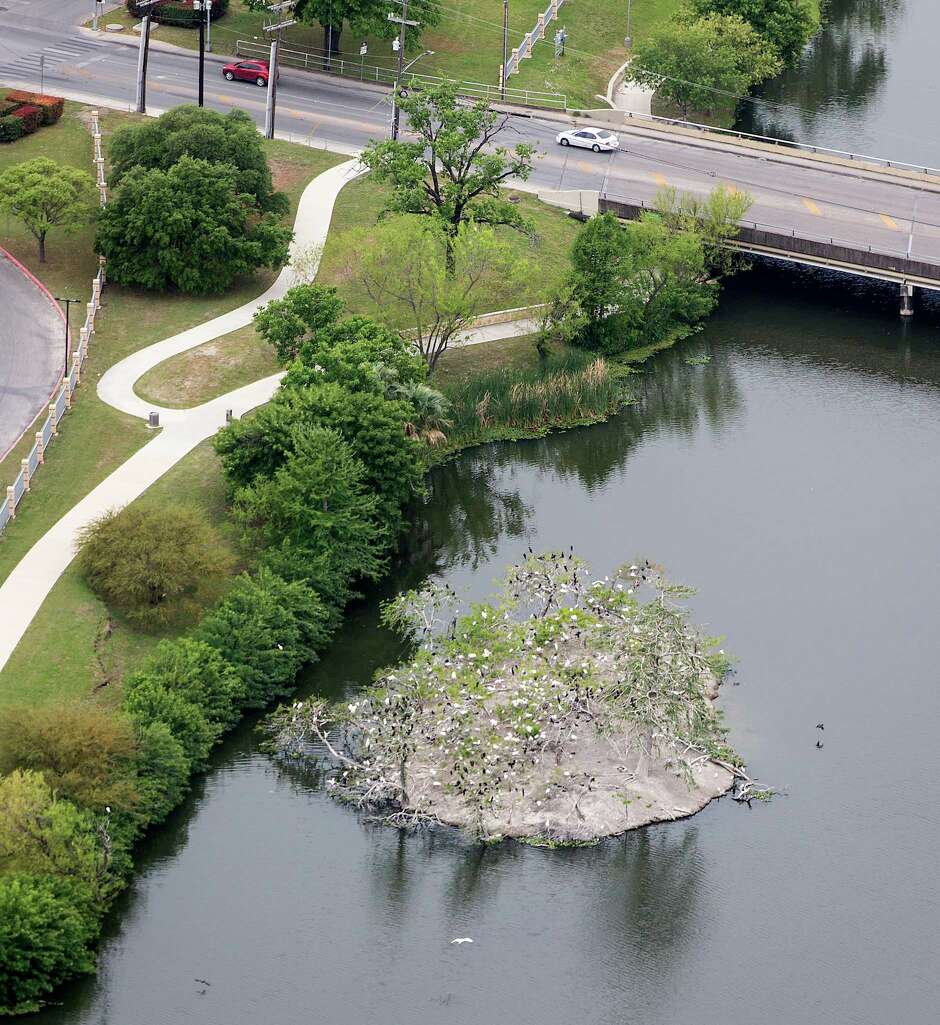 A cattle egret rookery on Bird Island in Elmendorf Lake, shown in an aerial photo April 3, 2019, will be trimmed back under a plan that seeks to reduce the risk of bird strikes involving aircraft flying to and from JBSA-Lackland. Photo: William Luther /Staff photographer

Next comes the noise. Crews will start using pyrotechnic cannons and other noisemakers as soon as Dec. 12, once final exams at nearby Our Lady of the Lake University have concluded. The barrage could continue through February. “Sometime between December 2019 and February 2020, you may hear noises similar to fireworks in the evening for roughly two hours before sunset,” the city said in a recent email to community leaders. The plan to use visual and audible means to discourage the egrets from nesting at Elmendorf Lake had been on hold since March, when egret eggs were found in a nest. Under federal law, measures cannot be taken to disperse migratory bird populations while the birds are breeding.

The city is carrying out the mitigation plan in coordination with the U.S. Department of Agriculture, which recently notified city officials that the bird breeding season had ended and that no more eggs were present. “If any remaining fledglings are present at the start of mitigation, the USDA will work with a wildlife rehabilitation specialist to provide care until fledglings are mature enough to be released back into the wild,” Ashley Alvarez, a public engagement officer with the city, said in the email to community leaders. “This would present the fledglings with the best opportunity for survival, while allowing important mitigation work to begin on the island before the start of the next breeding season,” Alvarez said.

Bird enthusiasts and some park patrons have expressed opposition to the plan, saying the lake is a critical habitat for migratory birds and other wildlife. But city and military officials say that as the birds travel to and from Covel Gardens Landfill to feed, they cross the path of aircraft flying in and out of Joint Base San Antonio-Lackland and Kelly Field at Port San Antonio.

A bird strike caused one of the most famous near-fatal incidents in U.S. commercial aviation history, the 2009 “Miracle on the Hudson.” A US Airways flight encountered a flock of migratory Canada geese shortly after takeoff from LaGuardia Airport in New York. Both of the Airbus A320’s engines were disabled. The pilot, Chesley “Sully” Sullenberger, guided the plane to a crash-landing on the Hudson River. All 155 people on board survived.

More recently in San Antonio, an Air Force F-16 was extensively damaged when it struck a bird on approach to Lackland on Aug. 29. The pilot landed safely. Damage to the plane’s engine was estimated at $500,000 to $2 million. Alesia Garlock, a local birdwatcher and wildlife advocate, said she understands the need to protect people and property but is concerned about declining bird populations worldwide and the loss of a special connection to nature at Elmendorf Lake Park. The risk of bird-aircraft strikes is pervasive because San Antonio is on a bird migration route, she said. “We know it happens, and it’s not just because of the cattle egrets,” Garlock said. “Destroying Bird Island is going to affect the whole ecological system at Elmendorf Lake.”

City Council members Shirley Gonzales and Clayton Perry, in a September opinion piece published in the San Antonio Express-News, said JBSA and USDA officials had approached the city with a “nonlethal, humane mitigation plan.” The plan, discussed at two public meetings early this year, was the subject of a community survey that generated proposals to alter flight patterns and reduce foraging areas near the Lackland airfield, among other ideas. A proposal for a bird radar system is being evaluated by JBSA.

The tree trimming and brush clearance on Bird Island will reduce the canopy there by 50 to 70 percent, Gonzales and Perry wrote. After that work has been done, the USDA will “track movements of birds to new locations, document and watch for impact on the airfield and surrounding neighborhoods,” the two council members wrote. “It is probable that some birds will remain at ‘Bird Island,’ but the objective of the plan is to humanely reduce the overpopulation to minimize the risks of bird-aircraft strike hazards,” they said. Officials said the city was mailing notices about the mitigation measures to residents and businesses within a 2-mile radius of the park.