The serious issue of bird strikes in Nigeria

The serious issue of bird strikes in Nigeria 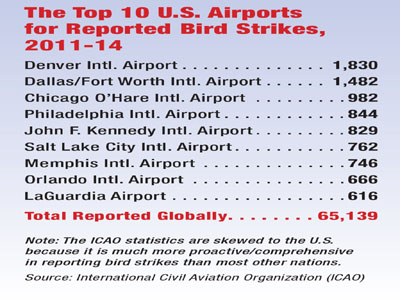 Birds strike is causing incalculable damage to the global air transport industry forcing airlines to incur huge costs in replacing vital parts damaged by flying birds. Bird strikes have  become a major threat to air safety globally. Over the years, collision between birds and aircraft has resulted in the death of hundreds of people due to crashes, and have resulted into losses estimated at over  $1.2 billion to the global aviation industry.
Nigerian carriers are not insulated, as they  continue to grapple with the challenges of bird strikes. In Nigeria,   data from the  Nigerian Civil Aviation Authority (NCAA) indicated that between 2005 and 2010, a total of 209 strike incidents were reported. Bird strikes not only lead to carriers losing money, it causes flight delays and disruptions to the operations of airlines. As a global challenges, airlines, regulatory bodies and airport authorities are rethinking their strategies on the best containment measures. In the United States, about $650 million is lost annually as a result of bird strikes.

There are bird strikes all over the world, resulting in emergency landings and damaged aircraft. The aviation industry spends a minimum of US$1.2 billion  per year on bird strike damage and delays, according to  John Allan, Head of the National Wildlife Management Center, which is part of the UK Animal Health and Veterinary Laboratories Agency. Statistics for bird strikes are murky. In 2012, there were 10,726 wildlife strikes in the U.S., the vast majority of which involved birds, according to the Federal Aviation Administration. The UK Civil Aviation Authority reported 2,215 bird strikes. But reporting standards, differ based on  each country’s experience,  according to  Allan, former chairman of the International Bird Strike Committee.

He is a  specialist in bird strike prevention in  England over the past 25 years. Allan said airlines and airports must work together to keep bird strikes to a minimum. Different countries across the globe have mapped out various strategies to keep  birds far from their airports. Singapore Changi Airport, for instance , has a 12-member wildlife management team that conducts daily patrols to monitor the movements of birds and other animals. Mynas, sparrows, egrets, crows and kites are common in Singapore. Singapore Changi Airport  broadcasts bird distress calls and puts anti-perching devices on railings near  runways and taxiways.

Managing bird strikes is a never-ending job for  many airports across the world. Investigations revealed that Nigerian airlines  lose  over  N20 billion to bird strike annually as the frequency of such incidents  increased over the years without sufficient  efforts to curtail it. Some airline operators, who declined to be named said,   bird strikes have become very regular that they have to make provisions for the possibility of changing aircraft engines many times in a year. Bird strike incidents usually affect the engines of aircraft, which cost about $1.5 million (N547.5 million) to replace, depending on the type and capacity of the aircraft involved in the incident. This is apart from the cost of shipping the engine into the country.

Between 2016 and 2017, Nigerian airlines experienced  no fewer than 27 bird strike incidents recorded across the country’s airports. Statistics obtained from the Nigerian Civil Aviation Authority (NCAA) indicated that airlines encountered 14 bird strikes during take-offs and another 13 on landings, with half of the incidents happening at the Murtala Muhammed International Airport, Lagos. In the period under review, Dana Air, Medview, Arik Air aircraft were hit by birds. The Nigerian Civil Aviation Regulation 2006/2009 Part 18 Offenses – Paragraph 23 (1), states that an aerodrome operator can be liable to a fine of N2.5 million in case of a bird strike. But  the regulatory agency is yet to sanction the Federal Airports Authority of Nigeria (FAAN) for any bird strike incidents at the nation’s airports. An aircraft engineer with the defunct Nigeria Airways, Chris Amokwu blamed  FAAN for the massive losses recorded by the airlines due to bird strike incidents. He said : “  FAAN is just looking at the airlines and allowing them to bear the cost alone through their insurance companies. Our approach to the menace has to be forensic because you need to know the kind of birds that are coming around. It is so deep and a lot of people who work in wildlife here just scratch the surface. They are not helping the airlines.“ In 2017, many Nigerian carriers including Arik Air spent about N3.2 billion to fix its aircraft which recorded 15 incidents of bird strike within twelve months. Aero on its part spent over N2.1 billion to fix  its aircraft involved in eight incidents of bird strike within 24 months. Medview experienced three incidents on bird strike forcing it to spent over N1.2 billion on the replacement of its aircraft engines. Dana Air , which recorded a single incident of bird strike, spent N547 .5 million to fix its aircraft  engine affected by strike within 12 months.

FAAN said it is responding to the menace of bird strike by putting in place measures to tackle it. Investigations revealed that FAAN has observed the presence of various habitat close  to the Lagos Airport where no fewer than 5,000 birds of varying species mill during the day. The birds   rest at night only to cause damage to aircraft when they fly off. According to the airport authority, for over 20 years, the birds have bred, hunted and fed in this habitat, multiplying exponentially.

In  the United States alone, there are over 13,000 bird strikes annually and despite this, they have found a way around the hazard to operate their aircraft. Nigeria is not insulated  from bird strike related incidents as between 1990 and 2019, there were  about 700 reported cases  of bird strikes. However, FAAN is looking at ways to either eradicate or reduce the threat.

On assumption of duty about seven months ago,  Managing Director of FAAN ,  Captain  Hamisu Yadudu  had a meeting with the Wildlife Control and Hazard Unit  on how to resolve the problem. Yadudu scheduled a meeting with the property owners  around the Lagos Airport  to enable the Wildlife Unit evolve measures to identify the birds. Following the intervention, trained ornithologists in the Department of Wildlife Control, were able to identify birds that create  problems for airlines and the things that attract birds to the airport. The team also evolved measures on  how to reduce or disperse birds from the airports, without  hindering  safe  flight operations.

A  source in FAAN’s Department of Wildlife Control said the agency had embarked on a project, tagged,  Roost Dispersal Operation of Murtala Muhammed Airport, which led to ornithologists discovering and categorizing and dispersing several species of birds at the  airport. Investigations revealed that in the last six to eight months, there has not been a reported case of bird strike around the nation’s airports and this is because the authority took time to identify the problem and has done something differently that turned this near-monthly occurrence around to the point of near eradication.